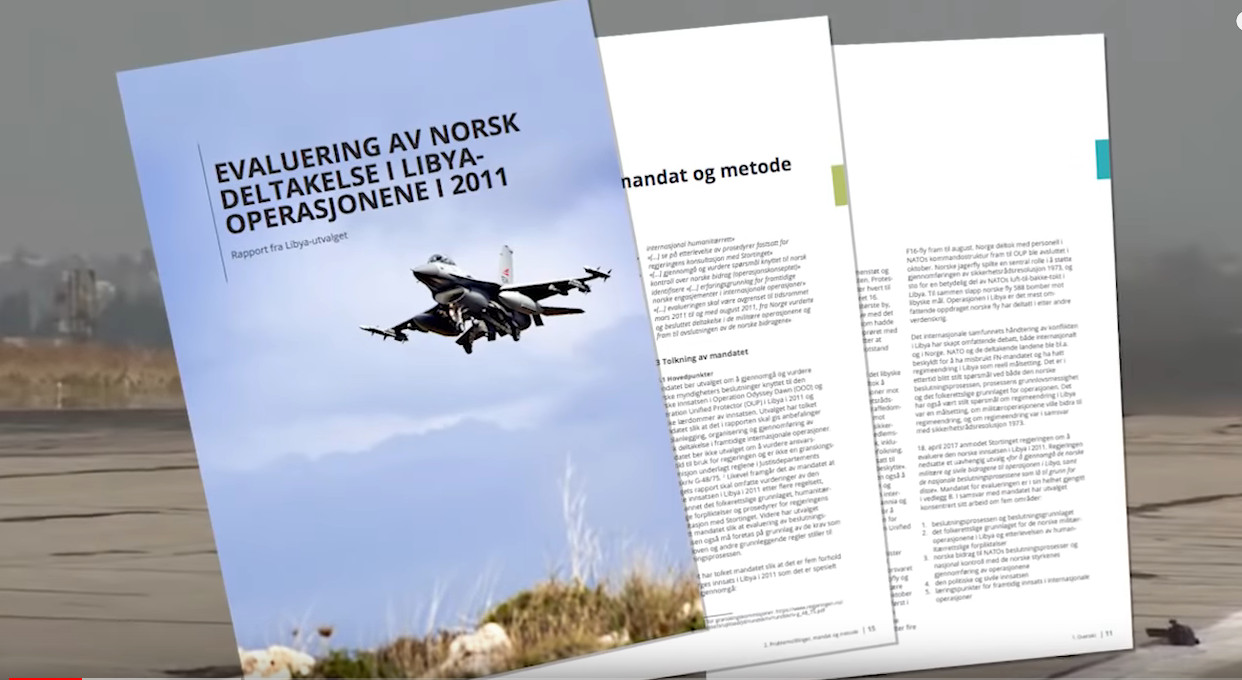 The image above and the videoclip below is extracted from from the Corbett Report film Killer Robots on the Black Market.

James Corbett of the Corbett Report breaks down the madness of bombing a country into a failed state without knowing anything about the situation in that country and without having been thretened by that country in this little snippet about what he thinks about the Libya War and the Norwegian Libya Report. (PEGI 13+)

A new 262-page official report from the Libya Committee called the Libya Report has been released with the introduction headline: EVALUATION OF THE NORWEGIAN PARTICIPATION IN THE LIBYA OPERATIONS IN 2011.

For a starter, in my opinion the headline could very well more acurately have been EVALUATION OF THE NORWEGIAN PARTICIPATION IN THE WAR CRIMES AGAINST A SOVEREIGN AFRICAN NATION THAT HAD NOT THREATENED NORWAY AT ALL FIRST IN 2011.

Since this is a big report, let us begin to look at the conclusion the Libya Committee has been reached in Chapter 12.5 Political and civil efforts:

The political trail and the military track in the Libya-conflict was insufficiently coordinated.

The contact group did not work as it should, and none of the different political traces succeeded.

Some regional actors criticized the NATO intervention and thought it came in
the way for a political trail led by the AU.

Although actors have different views on the possibility of a negotiated solution
and there is a risk of a negotiation trail can be used as a training tactic of a regime, should
coordination of military and political trajectories is prioritized.

Coordination of these tracks was also demanding for NATO. There were different views within the NATO coalition on
the need for a negotiated solution.

Another interesting thing I came across was in Chapter 5 where they say that attacking a country that has not attacked us first is not a violation of the Constitution.

The Constitution has no explicit provisions as
sets requirements for the decision-making basis upon which the government is based when a decision is taken in Norwegian government on Norwegian participation in international operations. Any constitutional requirements for decision-making must be based on the conclusions of the Constitution’s provisions regarding the responsibilities of the ministers, the liability law, relevant
practice and real considerations.

Historically and principally, democratic control is one
main purpose to make demands on the basis for government council decisions. When the resolution of a Royal Decree specifies the actual circumstances, considerations and balances on which the recommendation is based, the Storting also has the opportunity to control what the government has built,
and whether it has been followed up in practice.

Read the entire report yourself here:

The Norwegian Constitution, paragraph 25, is aware of the need for consent from the Parliament known as Stortinget to go to war. It reads as follows:

The land protection and other troops that can not be attributed to the lines, must never be used outside the borders of the country without the consent of the Storting.

This without the consent of the Storting as required by the Constitution.

Top Norwegian officials have now admitted they had very limited knowledge of events unfolding in Libya during 2010 and 2011, prior to NATO’s military intervention on behalf of anti-Gaddafi rebels — a war that resulted in regime change and a failed state ruled by competing governments and extremist militias to this day. Norway enthusiastically joined the US, UK, and French led bombing of the country initiated in March 2011 even knowing full well its military knew next to nothing of what was unfolding on the ground.

Furthermore, they write that:

The commission that produced the report was chaired by former Foreign Minister Jan Petersen, and ultimately concluded that politicians in Oslo dragged the nation into the US-led bombing campaign with no regard for what could come next.

NATO’s name for the operation was the US code name ‘Operation Odyssey Dawn,’ and Norway flew 596 strike missions during the first five months of the NATO intervention, dropping 588 bombs on Libyan targets, according to the report. Norway had provided six F-16 fighter jets and its pilots were reported to have conducted 10 percent of all coalition strikes against pro-Gaddafi forces.

This article is still being written and changes will apply and more information added in the near future as we come across more suitable additions so feel free to check back later for more as we get more information about what is in this Norwegian Libya Report, written by the government that stood for 10%, app. 500 bombs over a country that never, ever, neverever had or would have done any harm to Norway or Norwegian citizens. And as far as we are aware, none from the Norwegian govenment served jailtime for this, but one of them, you guessed it, was rewardet by being given the job as Nato boss. But if the Norwegian tax slaves refuse to pay taxes to finance the mad warhauks and the war crime party, they will sertainly be punished for that.